While on my way to visit Pizza a Casa pizza school in New York’s Lower East Side (see previous blog post), one of their neighbouring storefronts caught my eye.  With the name ‘Kossar’s Bialys‘, and taglines ‘World Famous Bakery’ and ‘Since 1936’, the curious foodie in me felt compelled to make an unplanned stop to investigate what lay behind the doors of this most intriguing shop…

As I entered Kossar’s, I was greeted by the enticing aroma of freshly baked bread and the welcoming vision of an array of bialys, bagels, pletzels and bulkas. 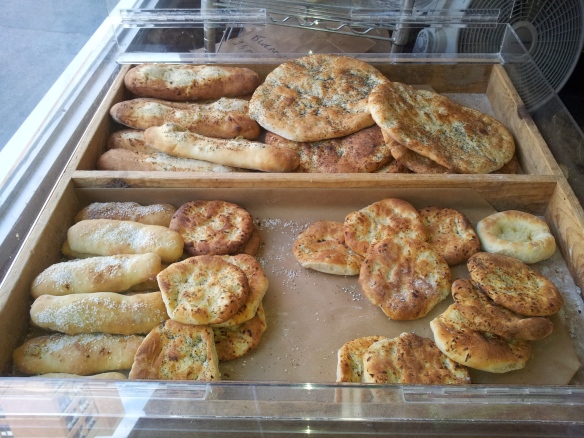 During my visit to Kossar’s, I spoke to the business’ owner and proprietor, David Zablocki. He told me the story of Kossar’s and how they became established in 1936 as a family run bakery who specialised in baking bread from Bialystok, Poland.  The round breads with a central indentation that they produced were known as kuchen or bialys, and were an everyday staple bread eaten by the Polish-Jewish community of Manhattan’s Lower East Side.

Fast forwarding to 2014, Kossar’s is now the oldest bialy bakery in the United States. They have an enormous amount pride and passion about their breads, as well as about upholding the traditions of Polish-Jewish baking.  As per these time-honoured traditions and techniques, Kossar’s lovingly handcraft their bialys and bagels with the aim of reviving the true authentic taste of these breads for new generations of food lovers.

You can hear my interview with David by clicking on the play button below.