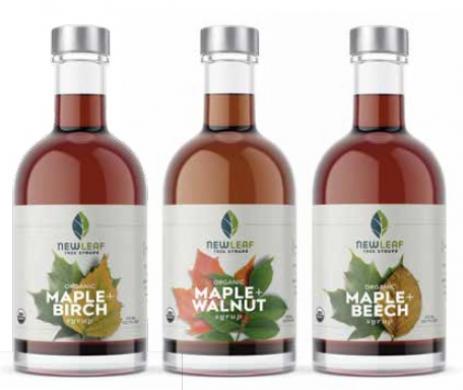 Best known as a perfect topping for waffles and pancakes, maple syrup can also be paired with a multitude of other culinary ingredients or prepared foods as a distinctively-flavoured glaze or drizzle. This versatile amber nectar has the added advantage of being a nutrient-dense, natural sweetener.

Maple syrup is produced by farmers in the North Eastern United States and Canada, as these regions have favourable climates for growing sugar maple trees (Acer Saccharum). The process of maple syrup production is complex, as I learnt from upstate New York-based Roxbury Mountain Maple and Vermont-based Deep Mountain Maple.

In the world of maple syrup production, there is a revolutionary new kid on the block called The Forest Farmers. They produce an innovative range of syrups under the brand name New Leaf Tree Syrups. What makes New Leaf Tree Syrups different from other producers is that they use maple sugaring techniques to tap the sap from trees other than maple trees, to produce a range of pure tree syrups. They also make blends and infusions that combine these tree syrups with maple.

The Forest Farmers was founded in 2016 and operates on 10,000 acres of forest land in New York and Vermont. The company comes with a impressive industry resume and pedigree, as their co-founder and CEO Dr. Michael Farrell was previously the director of Cornell University’s Maple Research Centre.

I spoke to Dr. Farrell about his company and how they produce their delicious range of syrups. You can hear the interview by clicking on the play button below.